outubro 30, 2017
Finally, almost 7 months after Brussels Airlines premiere at Madeira, we got one of its A320 and more importante one of the most beautifull special liveries (personal opinion) they have on those planes....
The closing of Thomas Cook Belgium and integration of its operations into Brussels Airlines made possible the second weekly flight from Brussels to Madeira, operated by this airline.
Having a Saturday flight to our island carried trough by A319, they started a new weekly route from the Belgian capital, this time with an Airbus A320 and the start was in big :)
(opposite to the lack of view of some other "cheap" airline that also started flying to Madeira that day....) 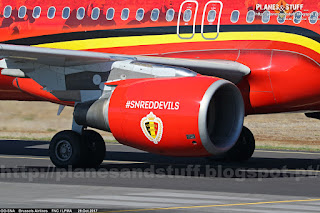