New Photo of the Week - RZO by Euroatlantic

As far as I know, it's the second time we receive a portuguese registration B757 around here.
The first one was back in 2006, with Euroatlantic's CS-TLX. You can see a couple of pics Here.

This one was doing flight RZO467/466 from Lisbon. This flight lately has brought some real rare stuff around here. This last week we also had around here at least a couple of A310 from White.
This kind of traffic will probably be mantained for the next month or two, depending on the return of CS-TKO to duty.

See you after next week as probably during next week I won't be updating... 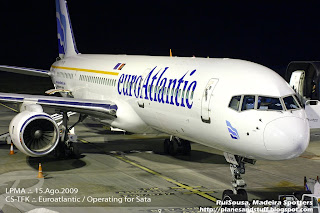