Split second on the Austrian...

julho 16, 2011
Last Wednesday went to the airport with the target on the first A318, schedulled to arrive around 5pm.

The Austrian was schedulled to half-an-hour earlier than that, so, despite it still wasn't the retro A320 (come on Austrian....!!!!) it was allways a nice catch as this airline livery is one of my favs.

The approach was a bit windy and the touch down was made with one wheel at each time with the extra of getting that split second where the strobe is on as the first wheel smokes down on the ground.... 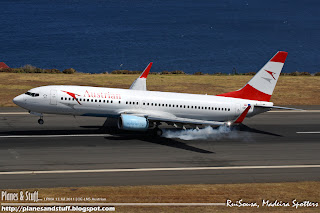