Primera (and a bit of KLM) take-off

fevereiro 16, 2011
Last Monday morning, there were a few motivs for an airport visit:
Jet2 was returning (from Manchester) and starting a new route, from Leeds, with the 2 planes arriving in the same half-an-hour) and the best: Air Finland was returning and this time with new colors.

Nevertheless, one of the most interesting moments in the morning was provided by Primera.
The plane was first noted for having a KLM winglet. 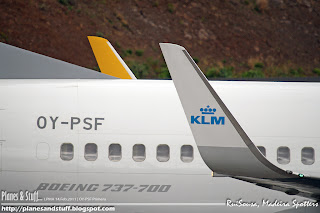 And then, on take off, from runway 23, was really noticed for making one of the most amazing take-offs I've seen around here...

Unfortunatelly both I and the other spotter that was with me weren't paying attention and when I managed to point my camera and take some pics it was already gaining some altitude...
Getting the left wing down right after rotation and keeping it that way for a while in the same height at first glimps gave me the impression that it was entering into a stall but then it started climbing...
Reminded me the famous TAP A310 low pass at Évora (Portugal Air Show 2007)
b737 lpma OY-PSF Primera