A rough afternoon for the Condors...

julho 16, 2011
The day after the arrival of the A318 went to the airport for finally take some pics before it went away.
Only managed to get to the airport by the end of the afternoon, which was rather nice because I just love the light of that time of the day and it's something I haven't done in a long time...

After the pics of the A318 went to the playground with my kid, planning on returning to the airport for the landing of the last Condor and the Sata.

M.S. had told me that the first Condor of the afternoon had only managed to land on the third atempt and with the strong wind, it looked like would be worth to get the landing.

The Condor arrived earlier than expected and I was still on my way to the car, at Santa Cruz, when saw the Condor on short final to runway 05....missed it, I tought...
Well, right after passing by, heard full trothle on the engines and saw Condor climbing out of the mountains....

Headed to the airport for the second atempt...it still took a while, supose it went to ABUSU to a little bit of a holding, expecting better wind conditions.

After a while there it came for the second atempt.... 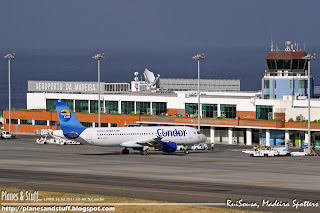