maio 03, 2011
Like I reported last post, Monarch returned yesterday, on flight from the Isle of Man.
Was hopping they would bring the A320 with the Royal Wedding titles (just to get something a little more special) but, no such luck.
Ended up arriving earlier than schedulled and I got a little more stuck at work, so missed the landing... (well, actually arrived just in time to stop, pick the camera and throw a couple of shots from the far distance that...as expected, were quite crappy....) 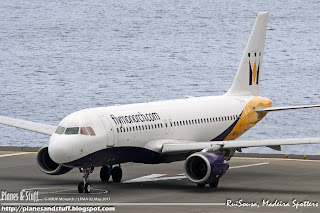